One of Ballinskelligs’ pubs (Cable O’Leary’s) is named after a local folk hero. Here is his story

The Infamous and famous eviction of Denis ‘Cable’ O’Leary

‘We still remember, we shall never forget’

In the depressed 1880′s during the Land War, many Iveragh tenants were evicted for failure to pay their rents. By January 1887 a number of evictions had taken place in the Ballinskelligs area and Donncha ‘Cable’ O’Leary was next on the list.
Donncha had been nick-named ‘Cable’ by the superintendent of the Transatlantic Cable Company after he had risked drowning to prevent the loss of a cable in deep water off Ballinskelligs beach. The superintendent named the recovered cable ‘Cable O’Leary’.
Though owning a well built slate roofed house, O’Leary said that he was unable to pay rent from the small income from his poor land. On 10 January 1887 an attempt at eviction by the sheriff, bailiffs and constabulary failed after Cable and his sons, armed with pikes, shovels, scythes and stones, resisted their attackers from the house loft. O’Leary repelled with a scythe an attempt to dislodge him from the loft, saying “níl agam ach an t-aon bheatha amháin,agus táim ullamh scara leí sar a fágfaidh me an áit” (I have but one life, and I am ready to lose it before I will leave this place). The attackers withdrew.
On 15th May a second eviction was attempted by two bailiffs, three emergency men and thirty constabulary. The head bailiff, Roe, infamous because of his brutality during the Glenbeigh evictions, ordered the roof to be demolished. Roe himself was brought to the ground when Cable’s daughter Brid dislodged the ladder from which he was operating. The supporting crowd of neighbours stoned the constabulary and two women were arrested but quickly released. This eviction attempt was also abandoned. The scene was photographed by a cable station worker, Mr. Cuthbert.
Four days later the bailiffs came again with 150 constabulary, but were enraged to find the house abandoned and stripped of all furniture and fittings, including the doors. The next morning, after the issuing of a warrant for his arrest, Cable O’Leary gave himself up at Cahersiveen barracks. He was released on bail and was to face trial charged with resistance and the ‘prodding of Roe the bailiff’. That evening he got a rapturous reception in Cahersiveen and was escorted out of town by a brass band on his way home.
Cable O Leary’s heroic defence of his home, as well as inspiring a song, inspired greater resistance to landlordism in the Iveragh area and the people of Prior Parish subsequently became very active in demanding better living conditions.
The notes above have been condensed from an excellent essay by Leo O’Shea, it was published in ‘The Iveragh Peninsula’ by John Crowley & John Leary. 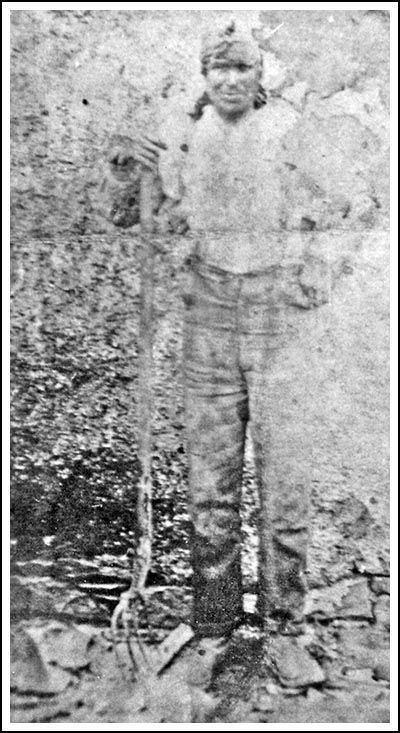 The song dedicated to Cable O’Leary

by the composer Michael Christopher O’Shea

On the rock bound coast of Iveragh,

Where the wild Atlantic waves;

In the Ballinskelligs caves,

Where the ancient Abbey crumbles,

But his home, alas no more.

‘Cable’ fought to save his homestead,

When girded round by steel bay’nets,

Of the Bailiff’s hireling foe.

All the neighbours wreak their vengeance

Near the home he held so dear;

Would fire his gallant heart,

And banish thoughts of fear.

‘Cable’ stood inside the threshold;

With a scythe grasped in his hand;

His children clustered round him,

With their father brave to stand,

To defend their humble dwelling,

Where such, happy days were spent;

But now are forced to vacate it,

‘Cause he cannot pay the rent.

And, as in ancient Rome;

Where Horatious held the bridge,

So ‘Cable’ held his home.

A dreaded cohort on route,

To vindicate the law.

When ‘Cable’ heard such tidings,

He knew his fight was o’er,

So flung aside his cudgels,

And opened wide the door.

He strode towards his kind neighbours,

With hands aloft, greeted him,

Cheered him loud and long.