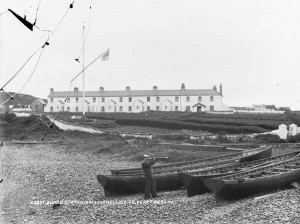 The Coast Guard Stations scattered around the coast of Kerry were set up by the British Navy in 1821 to curtail and if possible end smuggling on the coast of Ireland which was losing a great amount of money to the King’s or the Queen’s revenue. From 1836 they were given the added task of stamping out illegal distilling for the same reasons, but without much success. Apart from the ship ‘Manpower’ they had 11 cruisers off the coast of Ireland.
Smuggling was very extensive around the Kerry coasts at this time, they called it ‘Free Trade’. Lace, silk, wines, brandies and tobacco were sold at immense profit, making many people rich. Around the coast there were many caves, used for holding tobacco until such time as it would be safe. It was said at the time that there were no merchants who were not involved in the smuggling to a greater or lesser extent. The sail ships tried to avoid the rocky west and south west coasts both because of shipwrecks and because of smuggling.
‘Wreaking’, the practice of luring passing ships to destruction on the Kerry coast was not uncommon. A particular treacherous method of gaining booty at the time was to put a lantern hanging on the mane of a horse or the horns of a cow. From the sea the bobbing light appeared to be another craft with its light rising and falling in the waves.
It is said that The O’Connell family of Derrynane was very active in the smuggling around the coast. Their houses had very thick walls, five feet in thickness and the gables feet and many of them concealed small stores to hold the produce.
On the 31 of December, 1808 a pirate ship ‘The Hercules’ was blown off course and into Ballinskelligs Bay on its way back from the West Indies. Seven men died in the attempt to get ashore in bad weather. Some gold was found years afterwards by a maid of the local Sigerson family. The gold was put up for auction by Sigerson and Maurice ‘Hunting Cap’ O’Connell in order to raise funds for famine survivors.  A lot of ships were wreaked on the coast.
The Coast Guard stations were part of rural life around our coasts. The stations flourished during the 19th century. The coastguards were finally disbanded in 1923. They were about 100 years in operation in the country. They were vitally important in the eyes of the British Empire, they were closely linked on the Iveragh Coast, at Waterville, Ballinskelligs, Portmagee, Valentia, Cahirsiveen and Kells.
The Coastguards were known as “Na Fír Ghorma”
The Ballinskelligs station situated at Reen consisted of five residential buildings in a terrace, a boathouse and a slipway together with a house for the head officer, Capt. John McGready. John Horns, Harry Knox and Bob Twomey lived in the married quarters. Their children attended Ballinskelligs National School which was opened in 1867, where they learned English in a townland where Irish was the spoken language of the entire peasant population.
According to the stories at the time Capt McGready was not popular among the locals or his men. Even the most battered piece of driftwood was to be regarded as crown property and was surrendered to the Revenue Commissioners.
The ruined monastery of St. Michael which was once a seat of learning in the 13th century under the order of Augustinian Cannons, until it was despoiled during the reign of Elizabeth and Cromwell. This lonely roofless sanctuary by the sea became the first Christian burial ground in Ballinskelligs, full of crude strange structure tombs, where an erring coastguard would be detailed to stand watch by a strict captain to keep an eye on smuggling.
The Coastguards were mainly naval reservists, or men at the end of their service. They were good seamen, and highly capable of managing life boats, and were trained also in life saving. They also acted as recruiting agents for the British Army.
Paddy Heron’s Tavern was one of the licensed premises in Ballinskelligs at the time. Heron was a retired Naval Officer. The next owner of the pub was a Main who originally worked in the Cable Station before it closed in 1922.  Keatings in Dungegan was the second pub. Heron’s is now Cable O’Leary’s and Keating’s is still owned by the same family ‘Rosie’s’ whose mother was Keating. Rosie’s father’s name is Sigerson who were originally the landlords of the area, so the name still flourishes.
Many ships were shipwrecked on the coast. The Coastguards job was to salvage anything valuable from the ships. Often the locals would outwit them and get there before them and hide their spoils and use the wood to repair their houses etc.,
There are many stories of shipwrecks and adventures.

The Coastguard Station at Ballinskelligs was burnt down by the local I R A during the War of Independence, Most of the coastguard stations were destroyed at this time. The excuse was that they would become ready barracks for the British solders. The station at Valentia survived, it is now converted into holiday apartments. Kells Coastguard station also survived, it is now a private house. Cromane station is now a pub.
The Coastguard Station is now firmly entrenched in the past. Only roofless ruins to remind us, standing as visible evidence of an imperial colonisation as are the few houses left of the cable station.