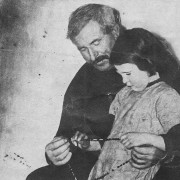 Located off the R566 Skellig Ring road, Ballinskelligs Priory (alternatively known and signposted as ‘The Abbey’) can be found either by driving straight on when you get to the crossroads by the beach (if travelling from the direction of Cahersiveen), or on foot from the beach itself.
Ballinskelligs Augustinian Priory was founded for monks who came to the mainland from Skellig Michael in the 12th Century after numerous attacks by Vikings. The Priory was dedicated to St. Michael, as was Skellig Michael, and the monks adopted the Augustinian rule.
A number of buildings, most from the 15th Century, constitute the priory, among them a rectangular church. The church and other buildings were arranged around a central cloister, which had covered walkways for working and praying. Parts of the cloister and a large domestic hall still survive.
There are a number of two-storey tombs in the priory.
The Abbey is one of a number of very important spiritual sites dedicated to St Michael in the area. If you come to Ballinskelligs in search of history or spirituality, this should definitely be on your itinerary.