You are here: Home / The Area / Ballinskelligs

THE BIG MYSTERY!!!  Where exactly is Ballinskelligs?

Ballinskelligs, like the often misty Skellig islands, is shrouded in mystery. New visitors to the area are often found wandering lost among its bewildering signposts, wondering whether they’ve arrived.

Don’t panic! If you find yourself wondering where you are, you’re probably here already. All of this has been designed to make your visit more mysterious.

Only here can the Wild Atlantic Way signs send you on a wild goose chase.

Just in case you want a simpler, less mysterious visit, here are some pointers.

First of all, what may be confusing to first-time visitors is that Ballinskelligs isn’t a town or a village, it’s an area made up of small villages or ‘Townlands’, each marked low down to the ground on a stone so that the leprechauns can read them.

Also, if you follow the road signs, you won’t find the word Ballinskelligs, you will only see white signs in Irish to Baile ’n Sceilg, and these tell you how far it is to the centre of the area (which is the Post Office). So if you’re facing the beach, there’s a sign telling you that you’re still 2km away, which of course you’re not, even if you’re looking for the post office, which is only about 200m away.

Basically, you can be fairly sure that the facilities you’re looking for are in one of two places. Either on the main road (R566) or in the village of Dungeagan (Dún Geágaín) which is off the main road between Browne’s garage/shop and Cill Rialaig Arts Centre.

There you’ll find Tig Rosie’s pub, St Michael’s Well and the Community Hall before finding the main road again at Cill Rialaig Arts Centre where you can head down past the sports ground, the Post Office and Cable O’Leary’s Pub to the junction at the end where a left turn will find you at Café Cois Trá (Cafe next to the beach). Trá means beach; this is very useful to know.

Straight on at that junction is the road to the pier via the Abbey; turning right instead will keep you on the R566 Skellig Ring (and still the Wild Atlantic Way) up to The Glen, St Finian’s Bay and the Skelligs Chocolate Factory. Yum.

If in doubt, call in to the garage/shop (Browne’s) or the Post Office (opposite Cable O’Leary’s), both of which are on the main road, where the locals will be happy to tell you you’re here. Or even better, park next to the beach café and pop in to see Barbara, our local expert.

Mystery solved… or is it?! Well, actually, yes. Sorry. 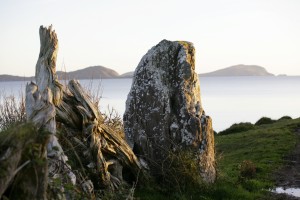 Ballinskelligs (Irish – Baile ’n Sceilg, meaning homestead of the rocks) is the diamond in the magnificent Skellig Ring between Waterville and Valentia Island. The area boasts some of the most spectacular scenery in Ireland with its wild rugged coastline, scattered islands, vast mountains, high passes, and miles of golden beaches and turquoise water.

You would have to be made of stone to be unmoved by the power of the place.

Why visit? Even a quick glance through this website will give you many reasons. There’s the scenery, the history, the beaches, the art, the music, the walks, the spiritual connection with St Michael and the sheer unspoiled quality of it all, but above all there’s a welcome here almost unrivalled in the world.

Here is a bit more information.

The rocks that lend the bay its name are Skellig Michael (Sceilg Mhichíl), an ancient monastic colony which lies off the coast from Ballinskelligs, and Little Skellig (Sceilg Bheag) which holds Ireland’s largest and the world’s second-largest Northern Gannett colony, with almost 30,000 pairs.

Skellig Michael is at the conjunction of two very important ley lines which connect with sites of great spirituality, a lot of which ‘happen to be’ named after St Michael, including St Michael’s Mount, Mont St Michel and St Michael’s Well. The lines also connect with the Michael line that passes through Glastonbury Tor and Stonehenge in the UK, and the main line can be traced all the way to Egypt. Whether you believe in ley lines or not, there’s undoubtedly a force connecting these places. That they have been built over centuries along connecting lines only discovered recently is compelling evidence of forces we don’t yet fully understand. Or it’s all bunkum. You decide.

Ballinskelligs has a unique historic connection to the monks that lived on Skellig Michael. They travelled all the way from Egypt searching for the place after all. The town is also the site of an attractive Blue Flag Beach, the ruins of a priory of Augustinian Canons (the Abbey), and the remains of the McCarthy Mor tower (the castle on the beach).

Being in the Ghaeltacht (Gaelic speaking region) Ballinkelligs has its own Irish College at the Comhchoiste (on the R567 just off the Ring Of Kerry) where children come in summer to learn the Irish Language.

With its clean waters for swimming, fishing, boating and surfing; enticing hills for walking; venues for relaxing, drinking, listening and celebrating; art for gazing and wondering; and people for welcoming, why wouldn’t you visit?